The best activities for teenagers in Japan | Expert Travel Tips

For many teenagers, the prospect of another paint-by-numbers family holiday is downright tedious.  With young adulthood looming and their horizons expanding, a less obvious choice of destination might be just the thing to get them interested. Our Japan Family Tour has been specifically created to uncover the best of what this fascinating country has to offer and is sure to impress even the most discerning of teenagers. Here we bring you a run-down of some of our favourite teen-friendly activities, all of which can be experienced on our family tour.

The Harajuku district in Tokyo is the epicentre of kawaii fashion.  The style plays with the boundary between cute and creepy and is integral to Tokyo’s youth culture. Voluminous skirts, toy-like plastic accessories and platform shoes are staples of the trend.  Head to Takeshita Street (Takeshita-dori) which starts opposite Harajuku Station for fun, affordable fashion and excellent people-watching.  For something a bit more sophisticated, visit nearby La Foret. The 7-storey shopping mall is dedicated to forward-thinking, independent designers, most of them Japanese.  Harajuku is also home to dozens of well-curated vintage clothing shops. Explore the warren of back streets between Kita-sando and Omotesando stations if second-hand shopping is your teenager’s thing.

Along with vending machines and convenience stores, Japan has elevated the humble capsule machine – gachapon in Japanese – to giddy heights.  Usually located in stations, shopping malls and arcades, these machines are perfect for picking up inexpensive and distinctively Japanese souvenirs. From hats for cats to fridge magnets in the shape of different species of tree frog – the variety of trinkets available is little short of mind-blowing.

Order sushi from a tablet

Even the fussiest of eaters will find something they can eat at Genki sushi. Along with sushi containing raw fish, there are other options that use cooked fish, meat and vegetables. And if none of those cut the mustard, you can choose from a selection of noodle soups and fast food.

Everything can be ordered from a tablet, which gives you the option of an English menu.  You can order up to three plates at a time and within a few minutes of ordering, your selections will be whooshed straight to your seat on the multi-tiered conveyor-belt.  All-you-can-drink green tea is complimentary and dispensed at the table.  You can find other restaurants in Japan with a similar self-service setup – some of which even convey your food to your table on board a miniature shinkansen bullet train! 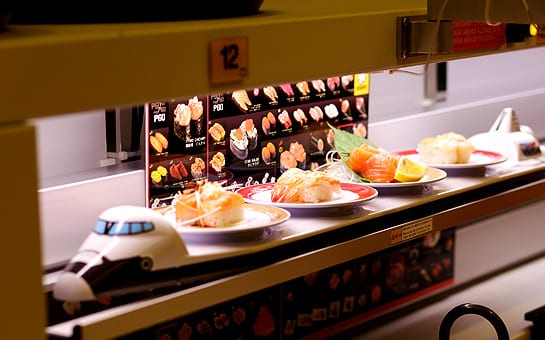 Wander through the streets of Gion

The Gion quarter in Kyoto was historically the city’s entertainment district. Wealthy merchants and samurai would visit the area to be entertained by the Geisha who lived and worked at the teahouses (chaya) that line its streets. Geisha are women who train (sometimes from childhood) in the traditional Japanese arts. They are expected to be skilled in dance, tea ceremony and classical music, among other disciplines. They must also be great conversationalists, able to set a relaxed atmosphere and minimise any awkwardness.

Only a couple of functioning teahouses remain in Gion, though many of the beautiful wooden chaya buildings still stand and have been repurposed as shops or restaurants.  You’ll see lots of women who look like geisha walking through Gion – see if you can spot the difference between the qualified geisha and women who have hired a traditional costume for the day. 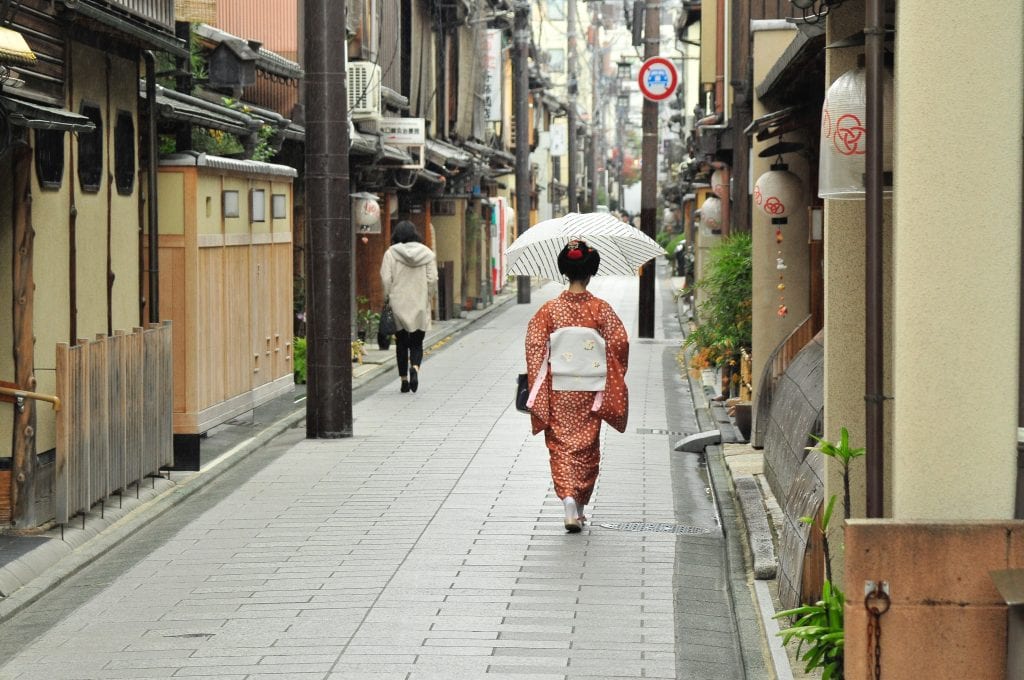 Climb to the top of the Fushimi Inari Shrine

The Fushimi Inari shrine is one of Japan’s most iconic landmarks. The site’s hundreds of red torii gates have provided the perfect photo opportunity for many a tourist.  As you approach the base of the shrine – a riot of souvenir shops, street food stalls and (most often) hundreds of people – you could be forgiven for thinking it’s a bit of a tourist trap.  However, as you ascend the mountain – guided by the red gates – you begin to lose the crowds and the views become increasingly breath-taking.  The hike up to the top and back down takes 2-3 hours and is manageable for those with a low to average fitness level.

Japan is home to numerous colonies of wild macaques, known as nihonzaru in Japanese.  The Iwatayama Monkey Park in Kyoto’s Arashiyama area provides one of the best opportunities to see them and – if you’re lucky – feed them.  Nothing compares to seeing animals thriving in their natural habitat and this will most likely be one of the most memorable parts of your trip.

Get lost in a multi-storey gaming arcade

Gaming arcades are an integral part of the buzzing, neon-lit landscapes of Tokyo and Osaka and can also be found dotted around Japan’s smaller cities. They tend to stretch over multiple floors and usually have claw machines containing high-quality plush toys on the ground floor.  Arcade games and pachinko pinball machines are located on the upper floors. Most of the games are pretty straight-forward to understand and can provide hours of entertainment.

Among the most fun to try are the taiko drums – in which a player and their competitor drum along to a pop song of their choice.  Or if dancing is your thing, try out a fast-paced dance game.  They can usually be played in solo or two-player mode. There are dozens of games to try, most of which cost 100-200yen a pop (0.70p/$1.00US – £1.40/$2.00US).  So as long as you don’t go wild, an arcade can be a fun and affordable way for your family to while away an hour or two.

Osaka is sometimes referred to as ‘Japan’s kitchen’ due to its being something of a foodie’s paradise. You may have heard that eating in public is considered rude in Japan. Nonetheless, stick it on a skewer and this point of etiquette tends to be overlooked. The Dotonbori area is home to some of the country’s best street food – check out our guide to food in Osaka for inspiration on what to try. 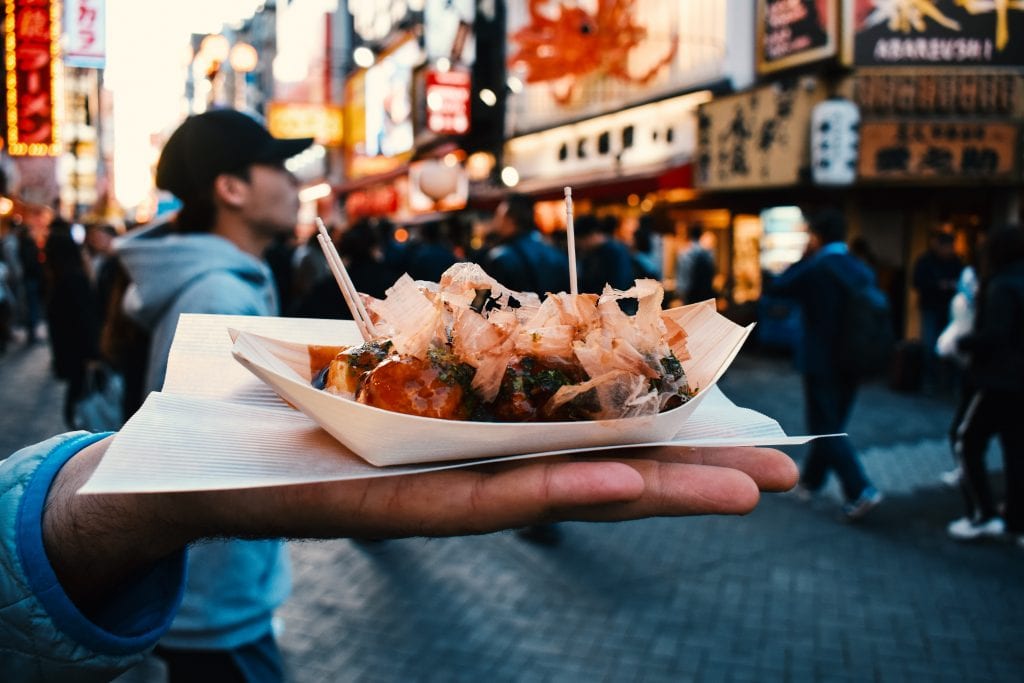 Get stuck into a comic book at the Manga Museum

Located in a disused school in Kyoto, the International Manga Museum houses a staggering selection of manga and graphic novels.  A must for manga and anime fans, this excursion provides the perfect opportunity to absorb yourself in a good read. While the majority of the collection is in Japanese, there is a decent selection of English translations.

Thinking about visiting Japan? Have a browse through our family trip itinerary or inquire right away!